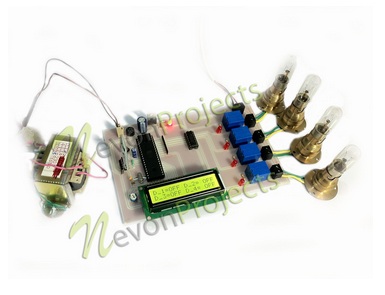 The project Voice controlled home automation project helps to control the electrical loads based on Bluetooth input signal. The Bluetooth device receives this input signal from android device. This system is especially beneficial in case of handicapped or aged people who find it difficult to walk and operate the electrical switches to turn on or off the loads. This system solves this issue as now the user just has to give voice commands to turn on or off the loads. Here 4 loads are used to demonstrate light, fan, heater and AC. All these loads can be individually turned ON/OFF or all loads at the same time. This system solves the issue by interfacing a unit with home appliances that switches these loads based on the input received from android device. The Android app also provides an effective GUI for providing this functionality.
This system makes use of 8051 microcontroller. The Bluetooth receiver is interfaced with microcontroller in order to accept the commands and then react accordingly. It operates the loads through a set of relays using a relay driver IC. Relays are used between loads and the control unit.
This system thus can be used in many domestic applications and in industrial setups. The power supply setup of the system contains a step down transformer of 230/12V, used to step down the voltage to 12VAC. To convert it to DC, a bridge rectifier is used. Capacitive filter is used which makes use of 7805 voltage regulator to regulate it to +5V that will be needed for microcontroller and other components operation, in order to remove ripples. 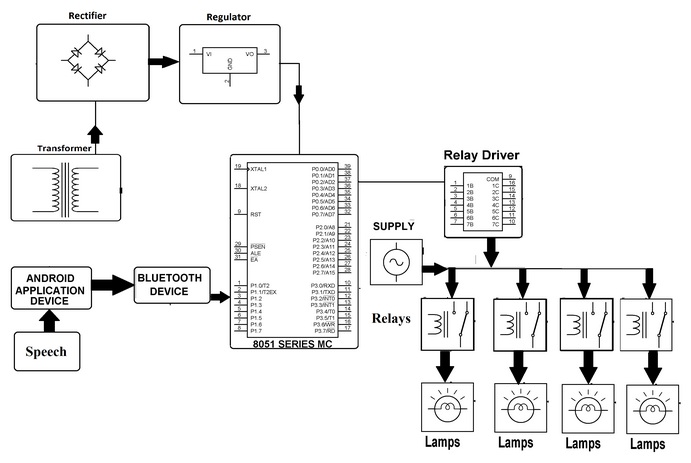