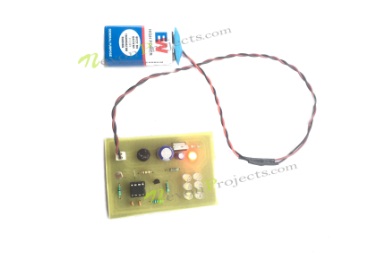 Visibility becomes an issue at night if the mains electricity fails and there is no power back up. Due to improper visibility the chances of a person getting hurt due to falling over or colliding due to things at home increases. The Smart Emergency Light system can help avoid this situation.
The system is equipped with light sensor which senses ambient light. If the intensity of light falls below the level of visibility (which happens mostly due to power outage at nights) the sensor senses this and informs the system about it. The system in turn responds by turning on a bunch of white LEDs connected to the system. This helps create a normal light intensity level to bring back visibility to normal. The LEDs remain ON till system is in ON condition. Once the system is turned OFF and turned ON again the next time, the system starts its ambient light intensity level scan again.
An LDR is a light dependent component that takes the ambient light to produce an output level at its terminals. So it’s different for a bright ambience than for a dark ambience having little or no lights. This value is used to configure the system trigger a timer IC to turn ON the LEDs connected to the IC for a specific amount of time. If ambient light remains low then the LEDs will be kept in ON condition as the timer IC will be getting the trigger from the LDR. In this way visibility can be maintained by Synchronously Blinking Emergency Light.