Sound Operated Timer Project is a multipurpose project. With the help of this project we can automate the task of turning ON a device and turning it back OFF. All this happens just with the sound of a clap in this project. The set up consists of a Mic that receives the sound of its surrounding to give it to the system for processing. With an impulsive sound such as a clap, the timer circuit gets triggered to turn on a relay. Turning on the relay results in turning ON of the load that is connected to the relay. This load remains ON for a stipulated period of time and then is turned OFF by the timer circuit. After this it waits for another clap sound to start the load again and the cycle goes on. In this way this project aims at automating the particular load connected to it with the help of a symbol of clap from the user.
The Mic is a transducer that converts voice signals into electrical signals so that we can process it in our circuit. What we are doing in the processing part is that we are amplifying the electrical pulses coming in from the mic. Once these signals are amplified they are clearer to the trigger circuit as a clap signal. Once this amplified clap signal reaches the trigger circuit the trigger of the load happens. The trigger circuit used over here is a 555 IC which is used in its mono-stable state. This state allows the IC to trigger the relay and hence the load with a single input pulse and let the load remain ON for the particular amount of time as per its time constant value. 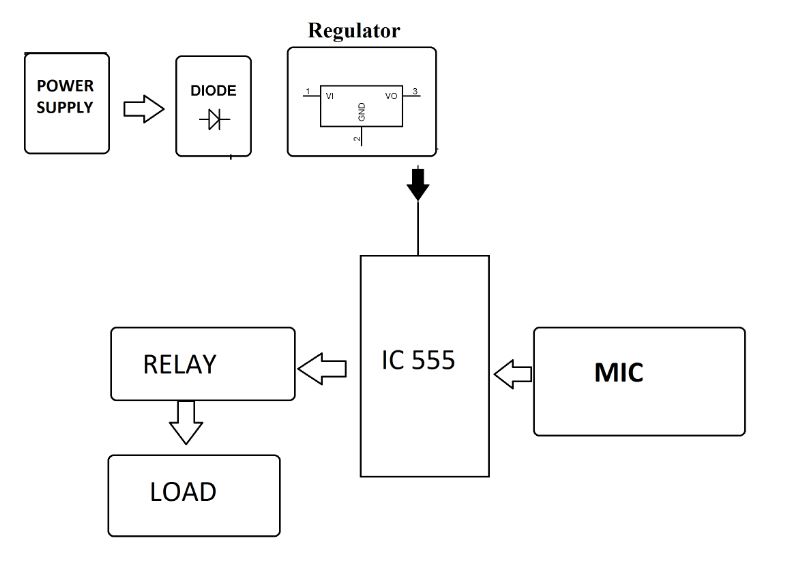