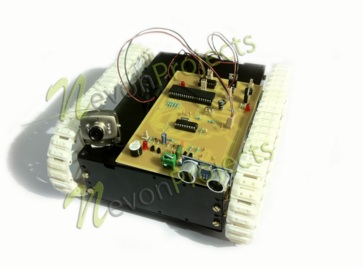 This system Long Range Spy Robot with Obstacle Detection allows not only to control the robot’s movements but also to stop the robot as soon as the robot encounters an obstacle. The user of this system doesn’t have to worry about the distance in order to operate the robot. The system does this with the help of DTMF technology which allows sending data commands via a call. The user wishing to operate the robot will just have to call on the mobile phone connected to this system. This system consists of 8051 family microcontroller which is interfaced to the ultrasonic obstacle detector, spy camera and the system also uses battery. The ultrasonic obstacle detector helps to detect any obstacle that comes in the way of the robot. The robot automatically stops once it detects any obstacle and then waits for the user commands. In order to operate the system, the user has to make a call to the phone connected to this robot. The receiver phone will have to receive the call in order to data commands necessary for the robot movements. The data commands will make the robot to either go in forward, backward, left or right direction. The system makes use of night vision enabled spy camera with the help of which the user can view the area captured by this spy camera which will be mounted on this robot. The user can view the area captured by this wireless camera not only during day time but also during night. All the area captured by this spy camera can be viewed in the PC. Thus with the help of DTMF technology, the system now allows the users to control the robots movement via mobile phone and stop its movement if an obstacle is encountered. 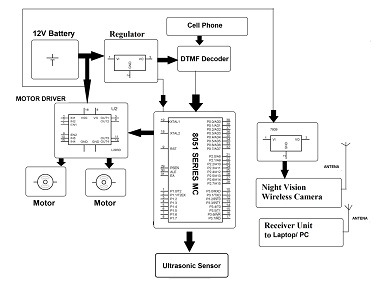