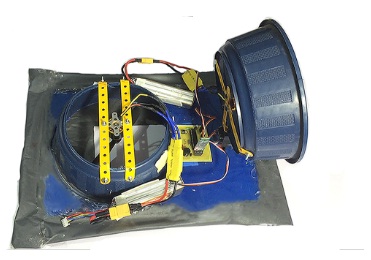 The most common problem of most of the hovercraft projects today is that it is not that efficient in taking turns with full power. So this problem no longer exists now as we have introduced our High Performance Hovercraft with power turning project. Hovercraft is a vehicle with no wheels but still capable of moving. This is made possible with the help of air balloon which makes it possible to hover as the amount of air in the balloon determines how long the hovercraft hovers. The hovercraft can hover on both land as well as water using high powered fans and aerodynamic design. This project now makes it possible for the hovercraft to take turns with full power which was the biggest drawback in the previous hovercraft project. This project makes use of 2 motors and a propeller for floating and hovering, moving the hovercraft in different directions. In order to reduce the friction below, it makes use motors which rotate at a very high RPM and thereby generating a force to make it hover on the surface smoothly. The other motor propeller which is mounted on the first motor is used to push the hovercraft in forward direction. This project also makes use of 2 batteries and is a microcontroller based circuit. This project is controlled by android application via which command is sent to hover the vehicle and to move the hovercraft in different directions after which, the other motor is set to push the hovercraft. The circuit also includes a Bluetooth receiver which is responsible for receiving and processing the commands received through android application. The microcontroller is then responsible for further processing the commands and taking appropriate action.
Thus this system is capable of hovering the hovercraft and simultaneously moving it in the desired direction with full power.