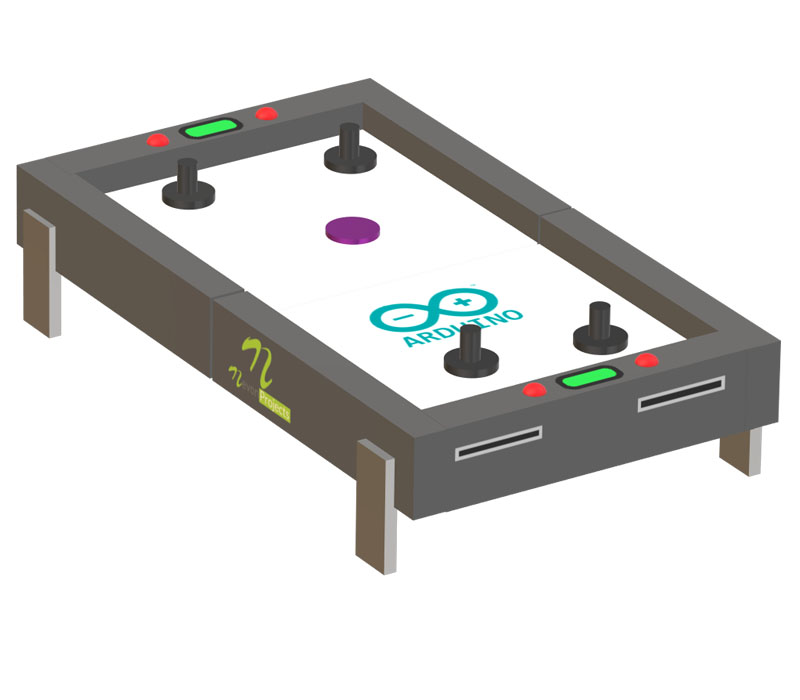 Air hockey is a widely loved indoor game where usually 2 players play against each other on a air powered low friction table. The usual game consists of 2 player scoring against each other using 2 paddles. Also the game is more fun when played on a larger table but larger tables occupy lots of space in your house.

We hereby design a project to take air hockey to the next level with an arduino powered multi player air hockey playing electronics integrated table that allows four players to play at a time with score counting. Also the 1 meter long table is a table top folding table that folds into a 50 cm area when foldable making it portable.

This system takes air hockey to a whole different level:

The board when powered on starts 2 motors that are used to blow air into the table space. This with the holes drilled on the top layer of table leads to gradual release of air creating a low friction board suitable for air hockey.

The system is powered by an arduino uno with 2 LCD displays to display score. The 4 goal posts are integrated with IR sensors to detect goal scores and update score on all 4 displays. When a goal is scored the IR Sensors detect the puck and update score in the system.

The system has 4 buttons provided for each player respectively which allow the player to quit. When a player quits his/her goal post is deactivated and score paused and the remaining players can play in 2 against 1 arrangement. If another player quits the remaining 2 players can play in a 1 against 1 match. The system freezes the scores of users not currently active until they resume.

There is a separate arrangement where users can reset all scores and start from 0 for all players. User can set a score option for a team on reaching which the team is selected a winner and winning music is played for them.