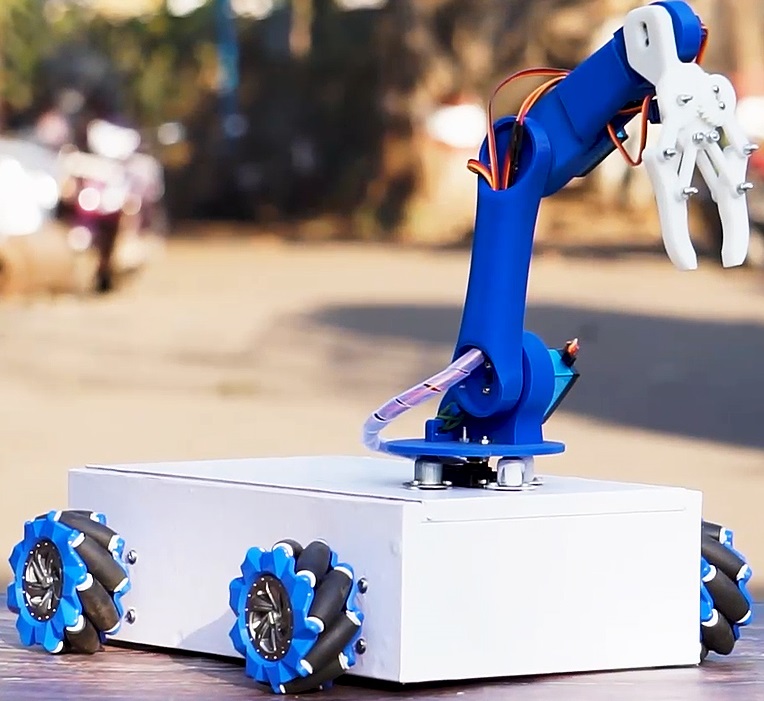 Industrial sector is growing at an enormous pace. Thus industrial automation is of key essence in todays world. All automation processes require pick and place mechanisms to transfer, rotate products moving on production tables or conveyors. But unlike a human worker who can pick up a product/material take it to some other workstation for a different process and place it on another, robotic arms are fixed at a location and cannot move to other locations.
Well we here solve this problem by designing a 4 DOF robotic arm that can not only pick and place objects but also move freely in any direction throughout the warehouse while performing automatic tasks.

The system makes use of an arduino Mega that interfaced with 4 x Stepper motors 6 x Servo Motors along with a Bluetooth module for communication to develop this robotic system. The stepper motors are integrated with mecanum wheels to allow for all direction motion.

We hereby use an android controller app to control the robot. The app connects to the robotic vehicle using a Bluetooth connection. Once connected we may now pass commands to the robot using manual or saved program for automatic operation.

Now many industrial processes involve repetitive tasks. These tasks may involve picking up a product at a workstation or conveyor and placing them inverted at another workstation. The system allows user to train the robotic system using a program and save the program so that the robot may execute the program in a loop and keep performing such complicated tasks repetitively.