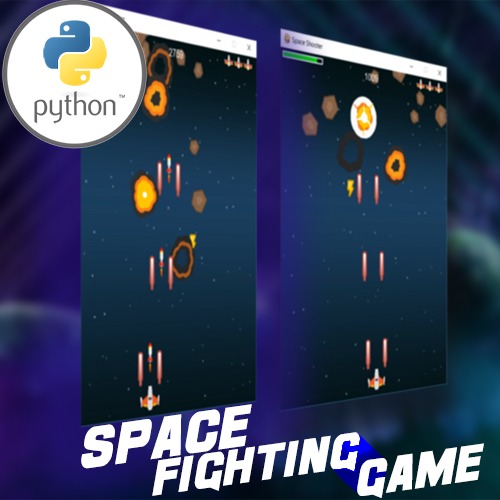 Reminiscent of many “shoot ’em up” video games from the early eighties- Space Shooter is an arcade game developed using Python as a programming language. Although built to be simplistic, the mechanics of this game are pretty dynamic. Moreover, the game also has engaging gameplay.

The player starts the game with three lives and has to constantly shoot and dodge to save themselves from being wiped out by a constant oncoming barrage of asteroids. A hit from an asteroid causes the player’s health to decrease. While smaller asteroids deal lesser damage, larger asteroids will deal a heavier blow to your health bar. Once the player’s health bar runs out, they lose a life.

This game also features two types of power-ups. While one boosts your defense by replenishing your health, the other improves your attack by doubling and tripling your rate of fire and increasing the damage dealt.
As a player’s score increases, the game bumps up the difficulty by increasing the frequency of the falling asteroids. Thereby, ensuring the player stays engaged and alert.

Pygame is a cross-platform set of Python modules which is used to create video games. It consists of computer graphics and sound libraries designed to be used with the Python programming language.

Pygame was officially written by Pete Shinners to replace PySDL. Pygame is suitable to create client-side applications that can be potentially wrapped in a standalone executable.