Due to increasing population, the utilization of vehicles is increasing in large numbers. There are numerous vehicles that keeps running on the streets in the same time, as a result of this the traffic issues are being confronted. Traffic signals are the most convenient way of controlling traffic in a busy junction. In many cases, we see that these signs fail to control the traffic successfully when a specific path has got more traffic than alternate paths. This circumstance makes that specific path more crowdie than alternate paths. In the conventional traffic control system, it may be observed that the time for which the signal light is glowing for a particular road will be always constant. Handling traffic manually in such regions involves constant manpower with continuous monitoring with conventional hard-wired controlled systems, which makes the system more complicated and difficult. In this traffic light control system project, we are using traffic density control so that we will be able to monitor the traffic density and control the delay of the traffic signals automatically. The traffic density is done by counting the number of vehicles in each lane and their weight. There will be four sensors in four different lanes, when car passes through the sensor it will collect the weight details of the vehicle by sensing. It calculates the vehicle densities in a lane at a 4-way lane cross and then gives the priority to each vehicle automatically using the PLC programming algorithm. The lights [green, yellow, red] ON & OFF time is determined depending on the density of the vehicles. 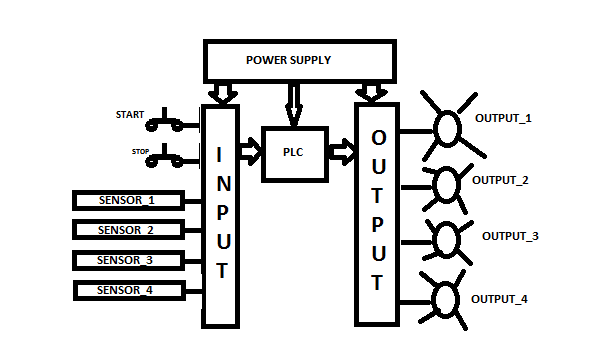